Fully Alive!
A Window Into the 2015 Province V Young Adult Retreat
- A Guest Post By My Friend Karl Stevens 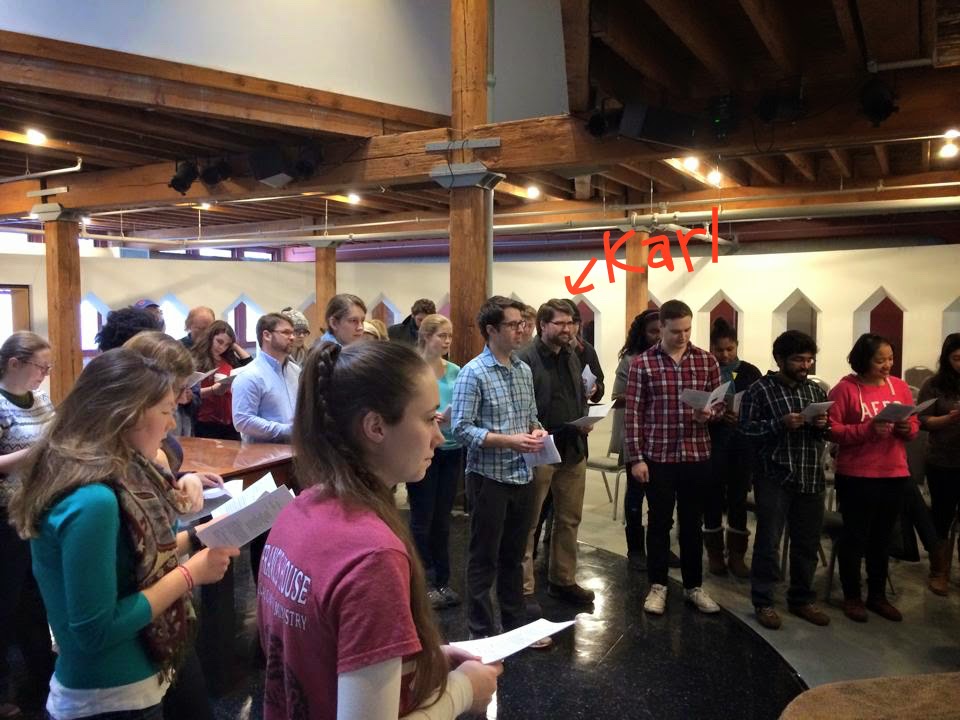 My good friend and colleague, the Rev. Karl Stevens (above), serves as Missioner for Campus Ministry with the Diocese of Southern Ohio and wrote the following reflection on the recent Province V Young Adult retreat at Grace Place, Chicago, IL. The weekend was a remarkable one in which 50 young adults from across our province - IL, IN, MI, WI, OH, and eastern MO - gathered together for a time organized around themes of improvisation and faith. John Poole wonderfully led the key note session, introducing the group to fundamental of improvisation through games and other practices. Other workshops explored themes of improvisation as it relates to music, worship, and sports. I am glad to share Karl's wonderful window into the weekend here, with his permission. JRM+

A line of people stood looking at a small table.  It was empty, but they’d been told that there was a television on it, and asked to describe that television.  “Use the phrase, ’it is,’ at the start of your description,” John Poole told them.  Hesitantly, people offered their phrases.  “It is black.  It is old.  It is a tube television.”  John then asked them to describe the television with the phrase ‘you are.’  “You are too far away from the couch.  You are heavy.  You smell like cigarettes.”  That last phrase stopped John in his tracks, it was so evocative of childhood, of grandmothers who set their ash trays on the top of warm TVs so that the stale smell of cigarettes rose like incense.  Finally, he asked them to describe the television with the phrase ‘thou art.’  “Thou art laughter when I’m feeling lonely.  Thou art conversations with my friends.  Thou art rest when I’m tired.”

We were in Chicago for the Fully Alive! retreat, practicing improv in the sanctuary of Grace Place church.  The retreat was the brainchild of myself and my colleagues Jonathan Melton and Stacy Alan.  Jonathan and I are both fans of Sam Wells book “Improvisation: The Drama of Christian Ethics.”  My own fascination with this book led me to Second City over the past summer, where I enrolled in a week long intensive course.  So Stacy’s suggestion that we shape this year’s Provincial Gathering around the theme of improv seemed like the continuation of a great and important pilgrimage.  At the same time, we knew that it would take some work to connect improv with Christian theology, while allowing retreat participants a chance to experience the joys of actual improv acting.  What Sam Wells needed a book to accomplish, we vaingloriously hoped to do in two days.

We were deeply fortunate to have John Poole there to teach and lead.  John has been an improv actor for years, and he chose exercises that illuminated the life of faith.  To call an object “thou art” is to invest it with meaning and power, and this leads to a sense of the sacredness of all things, even televisions and toasters.  More, it helps us to understand our relationship to the material world, and this deep awareness of objects and things is essential to Christian spirituality.  As Simone Weil said, “attention is the rarest and purest form of generosity.”

John was a wildly inventive retreat leader.  He made up two important games on the spot.  One was a sermonizing improv game.  A handful of people stood in a line.  He asked the audience for a random suggestion, and someone shouted out “poodles!”  He turned to the line of people and told them that they would now preach a sermon about poodles.  Pointing at people in turn, he had them each add a word or phrase to the sermon, playing off of what the person who went before them had said.  He used the same method for a game in which participants pretended to be parents trying to argue their children out of becoming Christians.  Many arguments against Christianity were raised, many of which showed the shallowness of our culture and ended up making Christianity look quite good.  We were sharing Grace Place with the homeless community, who were eating breakfast downstairs.  One of the improvisers said, “If you become a Christian, you’ll have to hang out with the homeless, and might even get to know their names.”

We found, as the day went on, that we simply didn’t have enough time to do everything we’d hope to do.  We would have benefited from more time set aside for theological reflection.  The material was so rich that we needed a week of improv, not a weekend.  And we also needed time for relaxation and community building.

We got some of that on Saturday night, when we split up into groups and went off to dinner, and then to an Improv Olympics (IO) show.  We had gathered a diverse group of students and young adults together.  There were international students from India and China, music students from Wisconsin and Ohio, theology students and environmental studies majors from Illinois and Michigan.  We had artists and engineers, medical students and poets.  And we came from a diversity of religious backgrounds: Episcopalians, Lutherans, Pentecostals, Baptists, Buddhists, and Hindus, as well as those who think of themselves as spiritual but not religious.  The IO show was almost guaranteed to surprise and challenge assumptions.  For some, moments of crudity in the improv we saw was liberating, for others it was simply offensive.  When the improv troupe asked for a suggestion from the audience, someone from our group shouted out “eucharist!”  We were treated to a thirty minute show of improvisation around the theme of eucharist, and for me this became almost anthropological - I was fascinated by the way that the actors picked up the theme and changed it, exhibiting a variety of understandings of the eucharist, most of which were radically different from my own.  If you want to understand how the church is perceived by secular society, shout out “eucharist” at an improv show.

For several years now we have been working on making the Provincial Gathering more focused and thematic.  And I’ve been asking myself if there’s a model for a Christian community that comes together for a distinct purpose and a limited amount of time, and then dissipates in the knowledge that this specific community with these specific people will probably never come back together again.  Recently a very smart English professor suggested to me that these time-limited, focused communities are, and always have been, pilgrimages.  When we set out to create the Provincial Gathering, we were, in effect, planning a pilgrimage.  We didn’t reach the destination of the Fully Alive! pilgrimage - it was too far a distance to travel in the time we gave ourselves.  But, oh, the people we encountered and the discoveries we made along the way!
at March 06, 2015

Don't worry, no humble brags here. Like John Oliver , I am not learning new languages or otherwise setting the world on fire these days....