Discerning the Good after Conversation with the Philosopher Barber 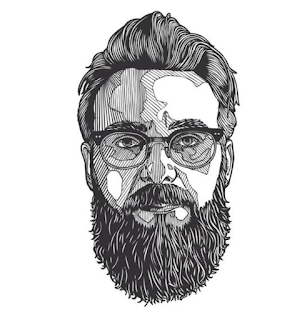 It's so quiet
If not for the traffic of skateboard
Wheels and cars, almost silent.

Today, any and all conversational laughter
Has inexplicably chosen the other side
Of the road, no exceptions.
It comes and goes with a
Staggered unpredictability, almost
Like it's opposite, like Grief.

Music is visible, if not audible,
Signaled by headphones that double as
Door knob tags like the kind you find in hotels:

Who would have thought that a crowd
Of thousands might be rightly described
As peaceful? Or lonely.
And how do you tell the difference?
Some of them carry such very
Large bags. Reminders that they
Are nomads on something like a pilgrimage.
And not unlike some pilgrims, maybe
Most, unsure themselves of
What this Thing's about,
Trusting that the well-worn paths
Have value because of the existence
Of the paths, proof (they hope) of value found
By previous travelers.
There is merit in such trust, of course.
None of us would be here on this sidewalk
If we did not think there was.

So many long, silent strides, and
Intensely purposeful steps. Meanwhile,
A bee finds me here, in the shade,
In my chair, on this beautiful porch
Under a cloudless pre-autumn sky,
Circling frivolously, curiously, even daringly,
Befriending my arm and my coffee cup
Apparently unconcerned to have
Missed the memo.

"Don't Wash Your Hands!" And Other Things My Kids Are Delighted Jesus Said