Bizarro Lectionary Edits & Deadly Protection from Being Found on the Margins

Necessary background for this post: first, this Sunday's lectionary; second, what the heck's a lectionary? Perfect. We're all set.

My biggest objection to the lectionary's editing out "uncomfortable" verses is the presupposition that you and I and others come to Scripture primarily to be comforted. I don't know everything about Jesus, but so far I've gathered that following Jesus is training in losing one's life. Likewise, I don't know everything about me, but I've gathered that losing my life does not come naturally to me. I expect to hit my head on certain parts of Scripture, or at least to be granted the occasional significant wrestling match.

Lectionary edits both "protect" us from the wrestling *and* so doing presume that the nature of the struggle is obvious and clear. If, however, the nature of the wrestling is *not* obvious and clear - something I take to be definitionally true of scriptural "wrestling" - then neither is it clear from what the lectionary is protecting us. In short, the lectionary makes assumptions about who is at the center of the biblical story and what that means that are dangerous because of the unquestioned de facto standing they enjoy.

An example. The troubling psalms about smashing the heads of the kids of the wicked on rocks (see psalm 137). Of course it is violent. Of course it is appalling. But at least one thing about the psalm is not clear and obvious: whether the hearer is being invited to 1) pray the cry as her own or 2) hear the cry of one she is oppressing. If the thing we are being protected from is praying this prayer in error, that's one thing (and still a debatable thing); if the thing we are being protected from is hearing the cries of those who could credibly cry these prayers against us, as Ellen Davis offers as at least one possibility, then the lectionary's "protection" is in point of fact furthering my immense propensity for self-deception. It is impossible for especially 21st century, middle-class, white Americans to write off prayers like psalm 137, written in the context of exile and slavery, as inapplicable to post-Ferguson America or unnecessary to the kinds of repentance truthful healing will require. Ellen Davis similarly argues that future generations could rightly pray these prayers against her and her generation's rapacious consumption of material goods without respect for the environmental impact on her children's children's children.

To read a psalm in the way Ellen Davis suggests may well warrant a protective warning sign like those the lectionary attempts - "Do not attempt this reading without a firm grasp of grace and the community of faith" - but the whole point is that the structural posture of institutional protection, if set up wrongly, can prevent the truly dangerous reading from ever taking place. When the embedded structure of the lectionary says, "Don't ever say that!" it obscures the possibility that someone is saying *that* to you. And that it would be very good to hear.

In "Overcoming Racial Faith," Willie Jennings writes convincingly about the racial implications of forgetting that, in the biblical narrative, "we were Gentiles, the real heathens." As Jennings writes,

Without a sense of the reality of being Gentiles growing and expanding in and with us, we declared that the biblical story was simply about the church and Christians and their destiny—in other words, all about us. The good of seeing ourselves through Scripture was distorted by the problems of not seeing ourselves rightly in Scripture. We should have seen ourselves as those who always understood what life was like from the margins, who understood what it meant to be an outsider, and who lived in ways that are always inclusive, built on an abiding humility and a sense of grace. We would have understood that becoming Christian meant a permanent opening of our identities toward those whom God would send into our lives, because it was exactly that opening that made us Christian in the first place.

Could Sunday's reading from Revelation be protecting us not from the possibility of persons outside the gates but from the realization that this is our place in the story? And why should Christians be afraid to be found on the margins? If our faith doesn't mean the trust that Christ will met us in the place of our most utter vulnerability, what in God's name does it mean? Or what else does it mean to worship the One who died for us outside the city gates?

A Window Into the Heart of the St. Francis House Community

Through the generous gift of two supporting families, we will soon be adding a window to the large walnut door that welcomes friends and strangers alike into the St. Francis House Chapel.

The window will be arched, following the prominent contours found throughout the Chapel space, with leaded design to match the Chapel’s original stained glass  windows. 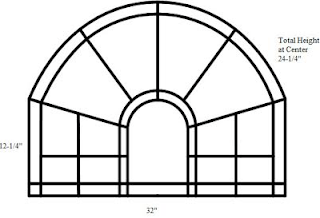 Although visually compelling, the window is foremost an act of hospitality. It takes courage to enter a new space for the first time. We are pleased to be able to offer individuals new to the Chapel an opportunity to see the space they are entering before they are in the space.
This window will allow future generations of students to glimpse the life in Jesus, holy friendship, and heart for others, that have been true of this place in decades past and which continue to be the invitation and possibility of this faith community today.
at April 19, 2016 No comments: 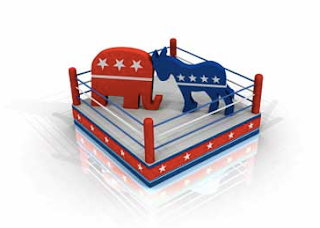 After a 13 hour work day yesterday, and staring down a late night again tonight, I took this morning off. I drove to one of my favorite Madison cafés to to read a new-to-me book, What the Dog Saw. The café's name is Manna Café and Bakery, and baked good are its speciality. Everything is wonderful, even the day old bread, which is something both remarkable and blasphemous at a place called Manna.

Unsurprisingly, at every visit to Manna Café and Bakery, as I'm waiting in line for my coffee, one of the delectable pastries will cry out my name from inside the glass enclosure. It was the cheese danish today. I obliged the danish and do not regret it.

As I paid for my coffee - and danish - I noticed a platter on top of the glass pastry case. The platter was full of red and blue cookies; "election cookies," said a small folded placard on the platter. Dozens of partially broken elephants and asses - what appeared to be shortbread with frosting.

Yesterday was an election day in Wisconsin. I voted. I do not write about my voting with any moral confidence, which is to say I wore my voting sticker as a form of confession. My scarlet letter.

I probably do not really mean that I wore the sticker as a form of confession. Still, the moral certitude with which well meaning folks annually chide or cajole others to go and do likewise remains a troubling puzzlement to me. Take, for instance, the common line, "If you don't vote, you can't complain," which strikes me as the pinnacle of logical absurdity on two counts. First, if I want to eat orange penguin cookies, there are none on the plate. If I want a gluten-free cookie, there are no options for me. Coke or Pepsi is a limiting choice for someone who has sworn off soda. In real life, children catch on to the parents' strategy of soliciting desirable behaviors from a preselected subset of choices sometime around age four. Second, though, is the more concerning and implicit assertion that the goal of voting is to be justified in one's later complaining. There is little in the public discourse to convince me that this goal is unintended.

Voting is a right and a part of what makes this country unique, but nowhere else with respect to unique American freedoms do we find the same rhetorical quality of force. Freedom of religion does not mean (in 2016) that I must choose a religion (secularly defined). Neither does freedom of speech prohibit individuals in orders from taking vows of silence. Even the hotly contested right to bear arms is seldom understood to imply moral judgment on those who refuse to do so. Nowhere else is at assumed that the right to an action necessitates understanding that action as normative. If voting is a sin, it is a powerful and socially collusive one.

But then again, I don't think voting is a sin. I do think that a view of voting that sees not voting as sinful has gone the way of idolatry, especially for Christians who must regularly remember God's warning in 1 Samuel that elevation of, in that case, a monarchy could impinge Israel's ability to remember its dependence on God. For the record, I do think there are reliably non-idolatrous ways to vote, and I personally think the greater challenge than abstaining from voting is remaining connected and present to voting process in non-idolatrous, probably necessarily playful, ways that point to a trust in God's reign and rule and which model an expectation of the Spirit's action, which is also an acknowledgment of our incompleteness apart from God. I also believe it is incumbent on any Christian who encourages others to vote to be ready and willing to commend the spiritual practices she/he has in place to prevent voting from becoming spiritually destructive in her/his own life.

To be sure, Christians should also be ready to speak to the ways the faith that is in them inspires their votes. Indeed, such speech would undoubtedly raise the bar of the present political discourse and also likely help voters make constructive linkages from political ideologies, abstractly held, to concrete practices available to them by which the motivation behind their votes would find physical expression in their lives. My further suspicion is that these conversations will be difficult if we start with "Who is right/wrong?" and more fruitful if the beginning place is "These things about the life of faith lead me to desire these political changes. But what do you see in the Gospel?"

Even so, an account of faithful execution of the act of voting is never out of place and/or beyond questioning, and Christians rightly include these accounts in conversations involving faith and politics.

I used to approach vacation as a celebration, an escape, a carrot on a stick to endure the hardest parts. Which is fine as far as it goes, b...