There has been some renewed talk of late -- much of it connected to the Church’s ongoing struggle to biblically interact with the issue of homosexuality -- pertaining to the Anglican notion of the so-called “three-legged stool”. The ‘stool’ (we desperately need a better name) is said to consist of the three tools available to the Church’s ongoing moral discernment: Scripture, Tradition, and Reason. The conversation, especially to the extent that it applies to divisive issues of Christian living, largely gravitates around the suggestion that Scripture alone is normative for the Christian faithful. Extreme conservatives, on cue, (mistakenly) cite the Reformation doctrine of sola scriptura (found nowhere in Luther -- or anywhere else through the 16th century, at least); and extreme liberals, also on cue, react against the notion of Scripture as of primary importance by the inclusion of resources that consciously diminish the preeminence of Scripture. I do not want to revisit either of the extremes in this space, but only to offer another understanding of the stool as descriptive (not normative) with respect to the Church’s reading of Scripture. This understanding is intentionally simplistic; it is also an understanding that reflects what I want to suggest is the most pertinent question: with whom (or where) does one read Scripture?

As a child, and even now, I understood the three-legged stool as a descriptive -- not a normative -- approach. That is, Tradition and Reason were not, for me, two extra resources available for those occasions when Scripture proved difficult and did not have the strength for the job; rather, Tradition and Reason described what happened when I came upon Scripture. As simply as I understood it, Reason was hard at work the moment I read the text and presumed to get the gist; Tradition occurred in the instant that I read alongside another one (dead or alive) who had read it before.

That Reason was present in my reading could be proved by Tradition; that is, when I read a text next to another person who read the same text, and when we read that same text with different understandings, I became aware that some variable in each of us produced the discrepancy. I learned to call that variable 'Reason'.

That Tradition was a descriptive aspect of my reading is something I am still learning not to take for granted. To me, Tradition simply means, “reading with others,” and I am still at a loss for why anyone would want to engage Scripture alone. It is not (just) that Scripture is frequently daunting and difficult; it is also that I do not understand why someone who did not believe herself called into the whole Body of Christ would want to read Scripture. (Don’t get me wrong, I thank God that folks do, but that’s my blind-spot as a cradle Episcopalian. My first encounter with Scripture is in worship.) Still, I would not back off from my claim that Tradition is descriptive (not normative) of the Church’s approach to Scripture; to be sure, it is the claim that Scripture’s reading belongs to the whole of Christ's Church that is normative.

For the Christian faithful, called together by the Triune God for worship of the same, Scripture is the location of those faithful in the story of God; it is our shaping at the hand of God; our playing at the feet of God; our learning of the wounds of God; our sharing in the heart of God. It does not happen alone. And that is precisely the rub when it comes to our current controversies, which might be summed, “Can’t I read without them?” But when you and I meet, face to face, under the Word of God preached to God’s People, make no mistake, it’s a three-legged race. It is the race of a People given over to God.
at June 25, 2009 No comments:

grace, its pursuit, and tennis balls

Here is the grace which our soul is seeking now, and which it will ever seek until that day when we know for a fact that he has wholly united us to himself.
Dame Julian of Norwich [c. 1417]
The Catholic theologian G.K. Chesterton once wrote that the thing that makes human beings appreciatively different from, say, dogs is the human’s ability to discern the meaning of symbols. Point to a ball, said Chesterton, and the human being will walk right up to it, while your doggie friend (man’s best or not) will only look back -- politely, perhaps -- and blink. Therein, he says, is the distinction that marks the human from the animal order. Maybe he’s right...I don’t know.

On most days, I’d like to hold out hope that my own dog, Lewis, might at last catch on to the gist of my own finger exten

It is sometimes painfully obvious that instilling new perspectives, new actions, new hope -- CHANGE -- is not the sort of thing that you or I can will for another (fill in the blank) child, parent, friend, whomever.

Which brings us back to my dog. Lewis and I spend hours together, playing together, running tog

ether. He and I can tell you every bounce and inch of the yard we share. Throw a ball one thousand times and no probability goes untested. Occasionally, though, he’ll loose sight of a ball tossed high in the air, and he’ll panic. The yard that -- one toss before -- had held our common familiarity, now, in this moment, becomes a challenge to him. These are the moments I test ol’ G.K.: as Lewis looks to me, eyes begging direction, I turn and I point to the spot of the ball.

He never finds it.

Not with me standing there, hollering, encouraging, pointing. But then, if I’m patient, I’ll take a step forward in the direction of my point -- and then another. Mind you, I don’t get the ball for him (after all, who’s training who?), but I do give him a living sense of the direction I intend. By three steps in -- even toward a ball some fifty yards off -- he’s got it.

Two Sunday mornings ago I was uniquely struck by our prayers in the early morning liturgy (hang with me here). We were praying the Prayers of the People -- and more specifically the petition for “bishops and other ministers, that they may set forth, both by their life and doctrine, thy true and lively Word...” As I listened -- prayed these words -- the union of life and doctrine could not have rung more truly: doctrine and living; pointing and walking; belief not being separable from the living pursuit by which that truth is embodied in the faithful.

There is not -- I am convinced -- one soul among us who does not desire to share the truth she has found in the Good News of Jesus: that sins are forgiven (even mine); that old wounds are healed (even mine); that mercy is the flood and drenching promise made to each and every child of God (even me). Even so, may we remember -- that is, may we never forget! -- that the surest means of sharing our fervor, of relaying this truth, remains in every moment to walk, together, toward the ball -- even the abounding grace we find as a People in Christ Jesus our Lord.
at June 23, 2009 1 comment:

for the sake of that one

Recently, St Helena's (Boerne) welcomed the Rev. Ned Bowersox into our common life as Interim Rector. Early on, he set what I imagine is an important tone for interim rectors, but doubtless, too, a true tone for all rectors. Ned said (paraphrasing), "There is a shepherd at St Helena's Church, and it's not me. I'm a sheep-dog to the shepherd -- but, emphatically, I AM NOT the shepherd." Importantly, Ned's comments remind St Helena's (and the whole of Christ's church) of the vicarious aspects of ordained ministry that point with every inch of them to the one priesthood of Christ, who alone is the Good Shepherd of the faithful.

I wonder how many churches in times of transition find it difficult to remember that -- whatever the stakes and whatever it appears might be lost in the process -- the place of Christ as their Shepherd is not up for grabs. Put another way, the congregation never ceases to act in and with the only resource that matters: the presence of the Risen Jesus who calls them into His Body and makes them His life for the world.

So, with all of this rattling around in my head, I stumbled on Bishop Willimon's blog from a couple of days ago; in it, he writes about the question of numbers, or, "Why does my pastor seem so caught up in growth?" And while it seems to me that purely numerical growth is an ever-present temptation to the church, Willimon helpfully reminds us that if the temptation is strong, it may be because there is a truth to be reclaimed in the inclination to grow; moreover, that truth emerges when the addition of members is not viewed with suspicion as the agenda of the pastor, but as the good and beating heart of the Lord who alone is Shepherd.

Forget "the 200 barrier" or "resource-sized" goals...what happens when the compassion of the church is expressed as Jesus expressed it: "for the sake of that one..."?

Which brings us to the end. Weekly, I encounter ministries who would like more P.R. "May we speak to the subject during Sunday's announcements?" they ask. "May we write one more testimonial in the Cross Finder?" "Would you send out an email?" And of course, we say yes, and will continue to do all of these (really good) things. But it is the heart of our Shepherd -- as well as the empirical witness -- that the most inspired invitation continues to be -- you guessed it -- the invitation, face to face, for the sake of that one. 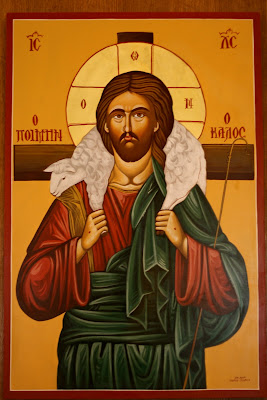 PS If you read through this article and didn't follow the link, it's not too late! You'll enjoy it.
at June 22, 2009 No comments:

Wednesday Homily: The Feast of the Martyrs of Uganda

There are days that leave us grasping for nobler things to say. Days when even our good sense cannot bail us out. Days when our first impulse (rightly) is grief.

Today is the day we remember--and in a true and strange way, celebrate--the deaths of thirty-two Ugandan Christian, by burning, and the faith for which they died. They were burned when the king rightly surmised that when they called Christ their king, they meant it.

It is not always peaceful to be peaceful.

All of which is why--points to the fact that--it takes courage to pray 'thy kingdom come.'

So the saints do not fear death; they don't even fear one another; and they have long ceased fearing themselves.

Freed from their fears, they sing songs, they forgive--they forgive!--even the ones who burn them.

O that we would take those words and plant them in our hearts; remind our selves of them; align our lives with them.

Be not afraid--where do those words find their target in you?

You and I, in Christ and together--may we find the courage--may we receive here the gift--to witness the peace and the joy of the risen Jesus--even, and especially, where our fears are revealed.
at June 03, 2009 No comments: