Your Love is Like Yogurt (a wedding homily for Kate & Kevin)

Wedding homily for Kate Schneider and Kevin Sampson. The readings they selected were Ruth, 1:6-18, 1 John 4:7-16, and Mark 12:28-34. Additionally, they had read the following meditation from Madeleine L'Engle (from the Irrational Season):

But ultimately there comes a moment when a decision must be made. Ultimately two people who love each other must ask themselves how much they hope for as their love grows and deepens, and how much risk they are willing to take…It is indeed a fearful gamble…Because it is the nature of love to create, a marriage itself is something which has to be created, so that, together we become a new creature.


To marry is the biggest risk in human relations that a person can take…If we commit ourselves to one person for life this is not, as many people think, a rejection of freedom; rather it demands the courage to move into all the risks of freedom, and the risk of love which is permanent; into that love which is not possession, but participation…It takes a lifetime to learn another person…When love is not possession, but participation, then it is part of that co-creation which is our human calling, and which implies such risk that it is often rejected.

Kate and Kevin, go ahead and look behind you, at these people. They’re here to witness love, but they’re also here because they love you.

People looking at Kevin and Kate looking at you, you came to witness love, but the truth about today is that your love for Kate and Kevin has shaped their imaginations for what love is and what it is to love. Each of you is a real part of the love they are about to promise to one another.

Weddings are unusual as church services go, because the readings aren’t predetermined. If they want to, the couple picks them. I have seldom encountered a couple who picked the readings as thoughtfully and conscientiously as Kate and Kevin have. The scriptures and meditation we just heard, read so beautifully, reveal something of the love the rest of you have shown them, to which you have opened them. You are the reason some texts jumped out at them and others didn’t. And the world of love reflected in what we just heard is pretty amazing. You get some credit for that.

But lest you get big heads about yourselves, you didn’t make it up, either. Someone else showed you, too. Sometimes they showed you in hurtful ways and you learned love by doing the opposite of what was done to you. But more often, I bet, something about the word someone spoke to you or the hand they extended to you or the silence someone shared with you communicated something of love that you received as a revelation of love. And it’s all being collected just now in a particular way, as the fire that burns in the hearts of the two pretty people at the center of this day. Their receiving love that you received and that was received before you by the people who made love known to you, in every generation, in each iteration, made new.

So Kevin and Kate come here today, as Madeleine L’Engle hinted, as participants in and not possessors of love. Love is active, comes to people, moves through them, too. We touch, receive, and share in love; we are always holding love that comes to us from somewhere else. Love has a source.

In this way, Kate and Kevin, your love is like yogurt. The two of you know as well as I do that it is not uncommon on the UW campus to come across students who make their own yogurt, and who want to see you do it too. It’s sweet, the determined enthusiasm of the yogurt enthusiasts. To make your own yogurt, you need milk and jars and, well, yogurt. This is where they always lose me. You need yogurt to make yogurt? If I had yogurt why would I need to make yogurt? But the yogurt you need is the starter, not the whole thing. In his letter, John celebrates the Divine as the yogurt that needs no starter, the source of the love to which all other loves belong, from which all other yogurt comes: “Beloved,” he writes, “let us love one another, because love is from God...God’s love was revealed among us in this way: God sent his only Son into the world so that we might live through him.” That love, like a starter yogurt strain, claims all the love that ever after comes from it. And so your love is a victory not its own.

In a commencement speech, that great theologian of the church Stephen Colbert said to a lawnful of college graduates, “You cannot win your life.” It’s the kind of thing that sounds true and sensible enough until some jerk cuts you off in traffic. Or you find yourself making a sacrifice that you know no one else will see. You cannot win your life. Not one of us gets out alive. If love is a victory not its own, then what is true of life is also true of love. You cannot win your love. There’s no doing love best, and certainly no doing love better than your partner or your parents or the privileged or the poor. Every victory of your love is a victory for all the loves that came before it and every love that follows it. Every victory of love is for the others. It’s true that love wins, but the victory of love comes not from vanquishing enemies, even on some days your spouse, but in celebration and remembrance of the source; in connection to and thanksgiving for the source.

Kevin and Kate, about that promise to love one another, the one you are both about to make, in the sacrament of marriage. My experience of you both is as people of the highest character and tremendous integrity. So - I’ll be honest - it is a little surprising that you would make a promise as risky, to use Madeleine L’Engle’s word, and as reckless as marriage. To promise love is to make a promise for which you cannot know beforehand what you’re promising. Except you do know you have promised to love. So you are committing yourselves, as far as I can tell, in the same way that improv comics commit themselves. They don’t know the lines or scenes ahead of time, but they promise to be generous players with each other and those around them. They know the only way to lose is to try to win the scenes. As stewards of a love you have received, give generously to one another and those around, forgive generously each other and those around you. Thank you for committing yourselves to love even what you don’t control, namely each other, and so becoming beacons for us all of the Love that is our home. 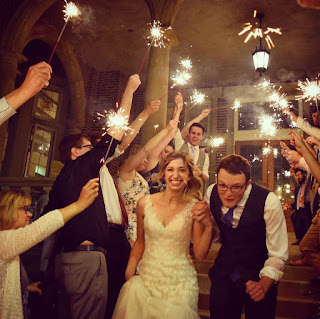