Belief and the God Who Sees Us First 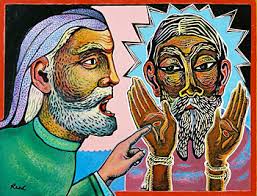 My Gratitude for Maundy Thursday

I've always loved Maundy Thursday. The front edge of the three day mystery. A part of the Passion, but with the rubrical option to replace the red of Passion with liturgical white or gold, in celebration of the moment: last supper meets first Eucharist. The intimacy of the table. The joy that belongs to the feast. The particular (sometimes fussy) coordinating of water, towels, and basins, in each place meticulous and distinct, inviting you and me into the proclivities of local tradition and the practices of previous, unseen generations, as protected by only slightly less unseen saints on altar guilds, for whom this kind of selfless service is par for the course. The self-conscious giggles and grumbles over feet. The embrace between the washed and the washing. The way it comes most naturally to children. A communion of brokenness, betrayal, and blessing. The raw insistence on our need for, and the presence of, forgiveness in the cup we come to drink. Jesus' cherishing his friends and, with the holy space his love creates, my fleeting hope each year that maybe, just maybe, the torches, clubs, and cudgels won't abruptly spoil the scene this time. The bread and the body, the blood and the wine, given for us. "Love one another, as I have loved you." Love of God brought close. And then, clubs do come. Cudgels and torches come, too. The dramatic turn, the kiss, and the putting swords away. The altar stripped of glory. The tender washing of tables. The clumsiness of human chains of helpers, handing item after holy item to each other, making emptiness in one space, creating chaos in another. And all by darkness, mostly. Like the darkness of the courtyard in which Peter at once found the fire and lost his confidence to promise anything. The psalmist's words echoing in the emptying space. The Sacrament escorted to the Garden.

Where - even on the front edge of the three day Passion mystery - Easter lilies wait to open. 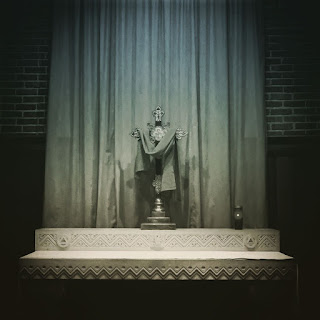