Luke, Lemons, and Grocery Stores:
The Beginning of the Spontaneous Singing Revolution 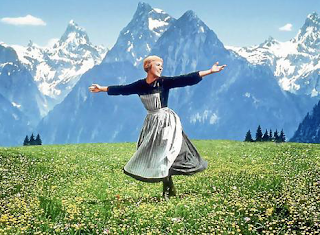 Sermon preached on Advent 2 at St. Francis House. You can find the Sunday's lessons here.

A friend of mine, at the church Bek and I attended in grad school, one time confessed his great dream for the Church and for Christians. His dream was that Christians would make the world brighter and truer by regularly breaking into spontaneous songs. Spice things up à la Julie Andrews. When pressed for details, my friend described an imagined scenario in which he was shopping in the produce aisle at a neighborhood grocery store and, unexpectedly, as he lifted up the perfectly selected lemon (not too soft, not too firm), he burst into song, extolling the lemon’s virtues. But that’s not all. In this scenario, having noticed this singing man with his lemon, other shoppers would look up and begin to sing, too - harmonizing their accompaniment. In this friend’s dream, people would learn to sing together and follow the cues of each other’s joy. Like every cheesy Disney musical come to life.

Interesting question: if you did this, if you lived by the rules of musicals, taking your cues from Disney throughout an ordinary week, stopping to sing at moments that gave you joy or perplexed you or broke your heart or filled you with rage or spilled over with laughter - or if you joined in with others where you saw them doing the same - where in your life would you sing?

My friend thought that Christians were in a unique position to introduce the spontaneous singing movement to the world because Christians have been given the psalms. He often wondered why people who have been given the psalms did not sing more often! How is it, he wondered, that people encounter these Scriptures without having their relationships - of all kinds, but not least with God - more obviously shaped by them? But it happens. For example, it is understandable, but still strange, that people who read the psalms every week are nevertheless reluctant to voice their honest anger and disappointment to God. The psalms are our permission to find such a voice! They are also our permission to sing.

Part of the problem, or challenge, is that Scripture now comes in a book. Once upon a time, the Bible was a collection of scrolls. That the Bible is now a book means that, most of the time, people do to it what they do to other books - read it silently - as opposed to speaking, hearing, or singing it. Interestingly, reading books silently is not what people have always and everywhere done with books. Augustine of Hippo, 4th century bishop of the early church, once wrote this about his beloved mentor, Ambrose:

"When he read," said Augustine, "his eyes scanned the page and his heart sought out the meaning, but his voice was silent and his tongue was still. Anyone could approach him freely and guests were not commonly announced, so that often, when we came to visit him, we found him reading like this in silence, for he never read aloud.”

Alberto Manguel elaborates: “Eyes scanning the page, tongue held still: that is exactly how I would describe a reader today, sitting with a book in a cafe across from the Church of St. Ambrose in Milan, reading, perhaps, Saint Augustine's Confessions. Like Ambrose, the reader has become deaf and blind to the world, to the passing crowds, to the chalky flesh-colored facades of the buildings. Nobody seems to notice a concentrating reader: withdrawn, intent, the reader becomes commonplace.

“To Augustine, however, such reading manners seemed sufficiently strange for him to note them in his Confessions. The implication is that this method of reading, this silent perusing of the page, was in his time something out of the ordinary, and that normal reading was performed out loud. Even though instances of silent reading can be traced to earlier dates, not until the tenth century does this manner of reading become usual in the West.”

Aside from making interesting trivia, Augustine’s observations about silent reading tell us that, very likely, no part of Scripture was written to be read that way. Again: the psalms are a whole book meant entirely for singing. And the psalms aren’t even close to the only songs in Scripture. There are close to two-hundred songs altogether, three of which occur in the first two chapters of Luke, surrounding the occasion of Jesus’ birth, making Luke’s gospel the gospel most likely to become a Broadway show in our lifetime.

The first song belongs to Mary; it is her response to Elizabeth, when Elizabeth blesses Mary for believing the promise of God. “My soul magnifies the Lord,” it begins, “and my spirit rejoices in God my Savior.” The second song belongs to Zechariah, John the Baptist’s daddy. It’s the canticle we read today, and it’s the work we see John doing in the gospel lesson. Halfway through this second song, Zechariah spells out his son’s vocation as the forerunner of the Messiah:

“And you, child, will be called the prophet of the Most High;
for you will go before the Lord to prepare his ways,
to give knowledge of salvation to his people
by the forgiveness of their sins.”

The third song is the most commonly known for those who regularly pray Compline or the Daily Office. It’s the Song of Simeon. Simeon sings his song in the moment Mary presents her son and puts him in the old man’s arms:

Lord, you now have set your servant free *
to go in peace as you have promised;
For these eyes of mine have seen the Savior, *
whom you have prepared for all the world to see;
A Light to enlighten the nations, *
and the glory of your people Israel.

That’s the case, if you want to make it, for renaming Luke’s gospel “Luke, the Musical.” Three songs in two chapters. None of the songs are original, not completely. Mary learned her song from Hannah, who sang something very like it years before her in 1 Samuel. Zechariah took his opening line from the psalms. Simeon borrowed liberally from the scroll of Isaiah. All the great jazz artists do this: lifting phrases played before them, finding the life in them and then, in their turn, giving the phrases new life. For Mary, Zechariah, and Simeon, the songs that they sing are responses, harmonies, movements toward the song God sings to them. And Christ is the song God sings to them.

Christ sings to you, too. To me. And while a lot of faith happens in our heads, faith finds roots and branches and buds of fruit when we stop reading in silence; when we risk vocal vibrations and raise melodies - both metaphorical and musical - up from our lips.

When singing Sunday hymns is as much about listening to your neighbor’s voice as it is about singing from your own, holy music is made. When friends get together and share with each other the stories of God at work in their lives, holy music is made. When one friend seeks out another with a heavy burden and says, “I love you too much to let you carry that weight by yourself,” holy music is made. Every time you shout back - with enthusiasm! - “Therefore, let us keep the feast! Alleluia!” that’s singing holy music. When a white person shares her broken heart at the death of a black man with her mostly white community of faith - not on Facebook - and stands up and says “this person was important to me,” that’s the tune of holy music. In the hard tears and embrace of forgiveness sought and received, you sing the holy music. When an image of Scripture comes to you, finds you, grabs you, and gives you the courage to reach out to a stranger in love, you take your place in the chorus of the love song that moves the sun and the stars.

It’s funny, you can read to yourself and by yourself, even when you are surrounded by others. And you can also sing by yourself, but you cannot sing to yourself, that is, silently. That’s thinking, not singing. To sing is to risk the possibility of sharing; the vulnerability of being heard. And only when we take that risk can we accompany one another.

Friends - like Mary, Zechariah, and Simeon - we were made to sing. You don’t have to be original; you may only sometimes be the melody. The only thing I can promise you for sure is that you will not sing alone. God’s song has split the silence. The first risk goes to God, where there is no fear but love.

Interesting question: if you were to follow, acting out your trust of the Song, taking your cues from our Savior throughout an ordinary week, stopping to sing at - or otherwise publicly tend to - moments that gave you joy or perplexed you or broke your heart or filled you with rage or spilled over with laughter - or if you joined in with others where you saw them doing the same - where in your life would you sing?

The Unexpected Green Leaf:
Advent Practices for 2 or More to Share 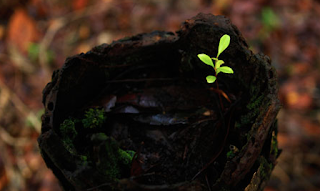 "A shoot will come up from the stump of Jesse; from his roots a Branch will bear fruit." Isaiah 11:1

A stump with an unexpected shoot - an inexplicable green leaf - frames and centers the season of Advent. Before we see the leaf, the stump names our hopelessness, our knowing better than to look for life in places that have been purged of life. There are many places in which it is easy to believe that growth is not possible. We encounter people and places and situations (incarceration, climate change, Syria, the neighbor who won't shovel the walk, ourselves). It can even become easy to go to church forgetting that the promise is always deeper, always wider. Not just a solemn act of obligation performed, but an expectation of encounter that leaves a mark. But then we see the unexpected green leaf.

One form of the Prayers of the People in the Episcopal Church's Book of Common Prayer includes the following bidding: "I ask your prayers for all who seek God, or a deeper knowledge of him." As a child, I found this bidding perplexing, because I assumed that we all would pray for deeper knowledge. At what point do we grow content? Or resigned? Or defeated? At what point do we forget the child's earnest petition, "More, please." Advent allows us to speak the world's dead and daunting spots honestly, still we dare not forget the green leaf, which is the emergence of Christ, the Good News that God is for us and with us; that God's heart is for our flourishing. The waters that flow from the crystal stream are moving.

One way we are remembering the green leaf of Advent at St. Francis House this year is by the commitment to engage one another and others who are important to us in weekly conversation around the following questions. We hope the practice will help us lean into the expectation of God's movement and growth - in the world around us, our faith community, and ourselves. We share the practice questions here for those who would like to learn this leaning with us, and because God has made us each and all for joy. 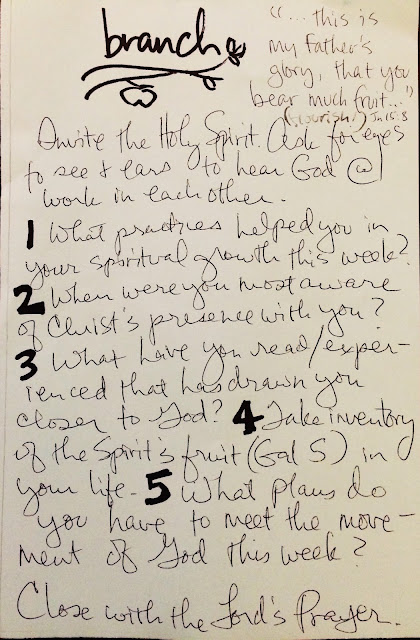