A Celebration of New Ministry (for Dad)

Bishop Sumner, Father and Mrs. Melton, sisters and brothers in Christ of St. James on-the-Lake, other friends from around Cedar Creek Lake and other neighbors - a special shout out to the folks from St. John’s, the church of my childhood, and my momma’s childhood, for that matter - grace and peace. It’s all joy to be with you tonight for this Celebration of New Ministry.

I had the good fortune of meeting Father and Mrs. Melton early on in my life. I don’t know if it’s needed, but I suppose I can vouch for them both. I mean, sure, his pinewood derby car skills leave something to be desired (it’s fine, Dad, my therapist says it’s gonna be fine), and Momma may have painted my room pink and sold the bed the day I left for college, but on the whole, they’re great people, no hard feelings.

From the 11th chapter of Matthew’s gospel: “…no one knows the Father except the Son and those to whom the Son chooses to reveal him.”

That’s a joke! Not blasphemy. We’ll, it’s been real.

No, but for real, before we get going, uh, you have to know a PK has his suspicions about nights like this. I remember as a kid, this same service, in South Bend, Indiana. And it came time for the gifts, you know, a Bible, chalice, the usual things. And the whole family’s up front. And someone marches up to the front and presents Dad with a brand new, bright yellow snow shovel. And Daddy takes it and smiles and thanks everyone with characteristic heartfelt thanks. But no one hears his thanks. They are all too busy laughing at us. Laughing, because we thought that toothpick of a shovel was an honest to goodness gift, but “we” were fifth-generation Texans for whom the words “lake-effect snow” had not yet been introduced to our vocabulary and so for whom the comical inadequacy of that shovel wasn’t in any way yet clear.

So before we go on, Daddy, you don’t go accepting any gifts that aren’t on the list tonight, you hear? I mean the prayer book list - and don’t go thanking folks for things you don’t understand yet. Someone gives you an alligator leash or some nonsense like that, you just hand it right back. It’s not on the list. That’s why the good bishop is here. He’s the bouncer for the list. That’s not true. But, still, Dad, for Pete’s sake, don’t go thanking folks tonight for a thing you don’t understand.

Except. Isn’t that exactly what we’re doing here tonight? Aren’t we exactly giving God our thanks for a thing we don’t understand, namely, that it is God’s delight to take strangers and make them into friends? Making ordinary folk like you and Mom and Dad friends of God and one another and giving you good work to do together for the building up of the church and the glory of God. God calls it reconciliation. It is the ministry of Jesus. It’s the ministry of bringing together, mending. Making whole. Casting nets and being gathered.

Jesus kicked it off around a lake, kinda like y’all. He made some invitations, and they didn’t know what they were signing up for, either. They dropped their nets. They got up. And next thing you know, we’re here, saying yes one more time, thanking God for a thing we don’t understand, putting us in the very good company of the first disciples. He says, “Follow me,” and they say yes. The beginning of a living trust and the joy of God. And that delight - taking strangers and making friends - is exactly what he promised those first fisherfolk. Whether you know it or not, you and this night are a part of that promise Jesus is keeping to his first friends, which is really a continuation of the promise God made to Abraham, that his descendants and God’s people would be like the stars in the sky, which is a promise I learned to take more seriously when Mom and Dad moved us out to this neck of the woods, to Athens, when I was a kid. On really dark nights I discovered that you really can’t count them at all. Sometimes it’s enough to be overwhelmed by the love that made and moves them.

Belonging to one another and to God. A thing God does with us, between us and God, pouring forgiveness in the cup, to make belonging true. Making us friends of God. And also a thing for which God gives us all that we need, most especially himself, to do with one another. Made friends with God, God makes us friends of each other, and others, too. Strangers into friends. While we were far off. Reconciliation. Gathering and gathered into nets. And we’re told this work gives Jesus joy. That it makes Jesus’ joy complete.

I think that’s why we call it a Celebration of New Ministry. It can’t be because he’s a spring chicken. And y’all, well, y’all are crazy. Mom and Dad are blessed by you. But it’s not like reconciliation is a thing Christians don’t have some practice at already. The ministry of reconciliation isn’t new. Although. I suppose, maybe new is relative, how you count it. A lot of folks still call the 1979 prayer book the new prayer book. I’m not saying we should replace it - I’m not one of those - but we can maybe stop calling it new. I mean, I stopped getting carded ten years ago, and the new book is older than me.

It’s not that reconciliation is new. And yet, this one, this friendship is. This holy expression of God doing God’s new thing over and over and over, faithfully from generation to generation, this occasion of the Spirit being present to God’s people in this place at this time in this way - this invitation to corporately inhabit the kingdom of his life, death, and resurrection - it’s new. It’s new because God in Christ is never not doing new; the man who said “follow me” is still moving, still seeking, still finding. If anyone is in Christ, bam! There. New creation.

And because this friendship belongs to the Christ of new creation, this friendship can never belong to itself. It belongs to the Lord who, God willing, will use the memory of his saving deeds and the memory of past strangers-into-friends, past new creations to inspire you and keep you, even in friendship, open to strangers. Even as your own friendships deepen, become holy - in fact, exactly because they deepen and become holy - they will stay and still be open to strangers, because you have learned to see in the strangers the world calls interruptions an unexpected gift, just as the disciples saw in Jesus’ interruption of their lives an unexpected gift. That gift is the new possibility, the new thing God would do. At parties. In prisons. Everywhere in between, learning that Paul was on to something, that the word of God, like his love, like his mercy, like his gentleness, like his generosity, like his patience, like his joy, like his presence isn’t far off, but is up close and near. Near to you. Up to something. Always moving. Inviting you to see. Inviting you to hear. Inviting us to follow.

O God of unchangeable power and eternal light: Look favorably on your whole Church, that wonderful and sacred mystery; by the effectual working of your providence, carry out in tranquillity the plan of salvation; let the whole world see and know that things which were cast down are being raised up, and things which had grown old are being made new, and that all things are being brought to their perfection by him through whom all things were made, your Son Jesus Christ our Lord. Amen. 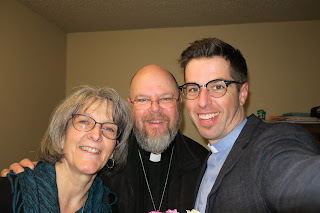 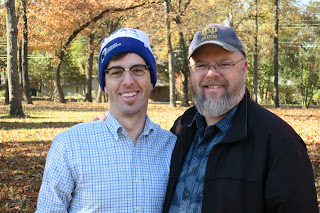 In Which He Attempts to Write a Blogpost Again

I recently saw somewhere an interview in which world-famous NASCAR driver Danica Patrick observed, “If you’re looking at the wall, that’s w...